Music for eyes and ears, heads and hands

Who is the third who walks always beside you?
When I count, there are only you and I together.
But when I look ahead up the white road there is always another one walking beside you.
Gliding wrapt in a brown mantle, hooded.
I do not know whether a man or a woman
– but who is that one on the other side of you?
T. S. Eliot: The Waste Land

Click below to read Macon Holt’s recommendation of the tour

In February Kirstine Lindemann will be visiting Moen, Funen and Zealand to perform a concert which includes recorder, percussion, electronics and …hands, eyes and eyelashes. We’re talking new music compositions – with a twist.

With the support of  The Danish Arts Council and their programme The Young Artistic Elite among others, Kirstine Lindemann presents an interdisciplinary concert in which the body plays a significant role. Among the pieces, the audience will have the opportunity to listen to music played on eyes, eyelashes, magnifying glasses, contact mics and a webcam.

With the title borrowed from T. S. Eliot and his poem The Waste Land, the concert unfolds around the theme of the unknown third, to which hands reach out, voices call out for and the eye looks after.

For artist and performer Kirstine Lindemann, it is not so much about fitting into a certain role or discipline, but rather about communicating personally with the outside world:

‘‘For me, the thing about being a musician can mean working within many different fields and expressions, but behind all of that lies a kind of primordial power of the need to communicate with the outside world from that special, intense and inclusive space which the music and the stage is to me’, Kirstine says. 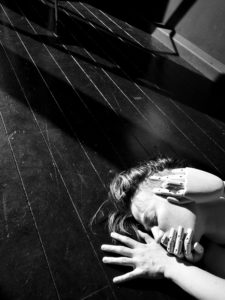